Mohammed Bin Rashid University of Medicine and Health Sciences (MBRU) held its third annual Board of Trustees meeting chaired by His Highness Sheikh Ahmed bin Saeed Al Maktoum, Chancellor of MBRU and Chairperson of the Board of Trustees.

During the meeting Dr. Amer Sharif presented the University’s key achievements for the 2017-2018 academic year followed by updates on MBRU’s future plans. The Board also discussed the establishment of a college of Nursing and Midwifery as well as offering postgraduate degrees in biomedical sciences and public health.

The meeting saw a number of notable updates beginning with the news of Professor Alawi Alsheikh-Ali’s appointment as a member of the Emirates Scientists’ Council; The joining of Professor Homero Rivas who was the Director of Innovative Surgery at Stanford University, as Associate Dean of Innovation and Future at the College of Medicine, an inaugural position at the University; as well as Dr. Khawla Humaid Belhoul who was appointed as an Assistant Dean of Student & Alumni Happiness & Wellbeing in addition to her role as Assistant Dean of Clinical Affairs in the Hamdan Bin Mohammed College of Dental Medicine.

Furthermore, MBRU also celebrated its second graduation of 26 postgraduate dental students, 14 of which are UAE Nationals, from its Hamdan Bin Mohammed College of Dental Medicine (HBMCDM). The graduates are officially recognized as specialists by the UAE health authorities upon graduation. Another first for HBMCDM is the joining of the first cohort of postgraduate dental students from Kuwait. Also, The Ministry of Higher Education and Scientific Research in Jordan has recognized MBRU’s Master of Science programs illustrating its value of connectivity and its mission to advance health in the UAE and the region.

MBRU also welcomed its highest cohort of medical students to date at its White Coat Ceremony 2018, a total of 64 students representing 18 nationalities, of which 40% of the student body are UAE Nationals. Other nationalities include students from Canada, the United States of America, Austria, Jordan, Egypt, Kenya and South Africa to name a few.

Speaking about partnerships, Dr. Amer Sharif shared the news of the Al Jalila Children’s Specialty Hospital launch of a residency program, which is run in academic partnership with MBRU. The Program is the only Saudi Board accredited pediatric program in the UAE, and it is also the first program of its kind supported by MBRU, which goes in parallel with the University’s vision of an integrated academic health system.

In line with the UAE National Advanced Sciences Agenda 2031, this year MBRU launched the MBRU-Al Mahmeed Collaborative Research Award 2018 aimed at advancing research in key areas of healthcare need in the UAE, as well as promoting partnerships between MBRU faculty and researchers from recognized GCC Universities and healthcare institutions.

Earlier this year MBRU celebrated a research milestone for publishing more than a 100 indexed publications in the National Library of Medicine (PubMed).

According to Scopus, the largest abstract and citation database of peer-reviewed literature, scientific journals, books and conference proceedings, MBRU is ranked within top institutions in UAE in Medicine and Dentistry in just 3 years.

MBRU is committed to developing healthcare professionals of tomorrow in line with the National Advanced Sciences Agenda 2031. 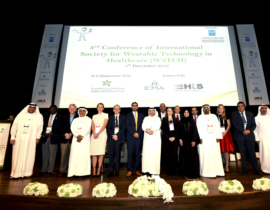