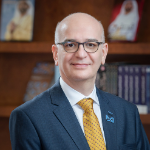 Hani BenAmer obtained his degrees in Libya and the UK. He has made important contributions to the field of SPECT imaging in Movement Disorders which led to the 123I-FP-CIT SPECT being licenced for clinical use in patients with Parkinsonism and tremor disorders. He contributed to the understanding of neurological disorders in the Arab world by systematically reviewing  the literature on major neurological diseases in Arab countries and publishing the first and only book on the subject .He developed an interest in medical education and was, for 4 years, Year 3 Academic Lead and Neurology Lead for the MB ChB Programme in the University of Birmingham (UK). He is one of the three founders and currently senior editor of the Libya Journal of Medicine.

Fellow of the Royal College of Physicians (FRCP)

The Specialist Training Authority of the Medical Royal Colleges in the United Kingdom.

Member of the Royal College of Physicians (MRCP)

The Royal College of Physician, UK.

The annual scientific meeting of The Scottish Association of Neurological Sciences.

A prospective study of presynaptic dopaminergic imaging in patients with mild parkinsonism and tremor disorders. Part 1. Baseline and 3-month observations.

LRRKS G2019S in the North African Population: A Review.

The differentiation between vascular parkinsonism and idiopathic Parkinson’s disease: A systematic review.

A systematic review of the epidemiology of epilepsy in Arab countries.

Frequency and clinical patterns of multiple sclerosis in Arab countries: A systematic review.