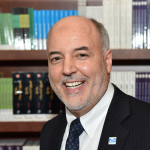 Dr Kowash received his Dental Degree (BDS) from Garyounis university, Libya in 1985, his Master and Doctorate of dental science in Pediatric Dentistry from the University of Leeds, UK in 1993 and 1999 respectively.  He became a member (1994) and subsequently a fellow of the Royal College of Dentists of Canada in 1998. In 2015 he became a fellow of the Royal College of Physicians and surgeons of Glasgow (FDSRCPS). Currently Dr Kowash is working at Hamdan Bin Mohammed College of Dental Medicine, Mohammed Bin Rashid Uinversity of Medicine and Health Sciences as an Associate Professor in Pedaitric Dentistry in Dubai, UAE. Before joining HBMCDM in September 2013, Dr. Kowash was a Consultant Pediatric Dentist at Tawam Hospital in Alain, UAE. In addition to his clinical duties at Tawam hospital, he was actively involved in clinical teaching of intern dentists and served as the head of Pediatric dentistry and the Research committee at Tawam Dental Centre. He has previously worked as an adjunct faculty professor of pediatric dentistry at RAK University, UAE. Dr. Kowash is an examiner for the Royal College of Edinburgh MFDS part 2 and HAAD and MOH Licensing examinations in UAE. He has several publications and a reviewer in several international dental journals. He is a regular guest speaker in national and international dental conferences.

Royal College of Surgeon of Edinburgh

Royal College of Physicians and Surgeons of Glasgow, UK

Royal College of Dentists of Canada

Royal college of physicians and surgeons of Glasgow, UK

Cost-effectiveness of a long-term dental health education program for the prevention of early childhood caries.

Enamel demineralization in situ with various frequencies of carbohydrate consumption with and without fluoride toothpaste.

Effectiveness on oral health of a long-term health education programme for mothers with young children.