A new study by researchers at the Mohammed Bin Rashid University of Medicine and Health Sciences (MBRU), provides fresh insight into the understanding of the potential brain structure changes in autism spectrum disorder (ASD) – a neurodevelopmental disorder that is usually diagnosed in early childhood; and is thought to be largely caused by genetic factors.

In the study, MBRU researchers identified the role of neuronal and non-neuronal cell types in the development of ASD based on data obtained from three brain regions of eight neurotypical human tissue donors to the Allen Brain Atlas – an integrated spatio-temporal portal for exploring the central nervous system.

The pioneering research, designed to explore possible causes of ASD, identified the genes that were significant across all tests, which were then subjected to further downstream analysis in clusters, ranging from 349 to 2671 genes.

“The data was extensively processed and clustered to identify differentially expressed genes across all three brain regions,” explained Dr. Mohammed Uddin, Associate Professor of Human Genetics at the College of Medicine, MBRU.

“During the study, multiple PLXNB1 and KANK1 variants in ASD cases were reported and these genes were prominently expressed in astrocytes compared to neurons. These findings suggest that, among those with ASD, a subgroup harbor loss-of-function mutation in genes that are evolutionarily constrained and regulate non-neuronal cell types in the brain. The results show that some subtypes of autism affect only glia and add to the evidence that these cells play an important role in the condition.”

“These results provide us with significant evidence on which to raise awareness of the possible causes of ASD.” added Dr. Uddin.

Glial cells, including Microglia – the primary immune cells of the nervous system, astrocytes – the most abundant glial cell type, and the myelin-producing cells – oligodendrocyte, are delicate connective tissue that supports and binds together the nervous elements of the central nervous system.

The results of this research show that some autism subtypes affect only the non-neuronal glial which bind together elements of the central nervous system and clean up excess neurotransmitters, defending the brain against infection and guide neuron development.

The extensive study has been published in Human Genomics, a peer-reviewed journal, and the team from MBRU is now hoping their work will encourage and help facilitate further ‘beyond neuronal cell’ research into the development and causes of ASD. 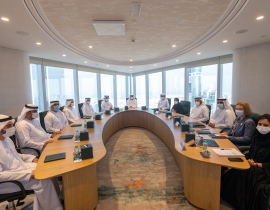